Did you know disagreements can be a healthy antidote for biases? 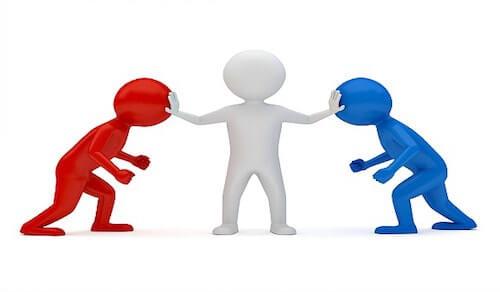 I frequently look for ways to demonstrate the parallel between scientific findings and hypnosis (hypnotherapy) and this one is a good example. The language we use, in the context of oft-repeated words and phrases we use, plays a big role in the emotional states we experience most . . . what are the words that you use, that are keeping you where you don't want to be?

Sometimes we have to step outside of our beliefs!

Let us be frank, people who do not perceive they have a problem very rarely come for therapy. An example of one who may is someone who comes for past life regression, where the client merely has an interest in exploring the possibility of a past life, with or without any perception of an issue relative to their current life. However, I am also aware that there are plenty of people who think that everyone else has an issue and that they (the others) need therapy; this personality type rarely presents for therapy; why would they?

So, for those that believe they have an issue, presenting for therapy is, perhaps, their recognition that life just isn't going the way they thought it would. So, what is an issue or problem? In its simplest form, an issue can be described as something that inhibits or interferes with the pursuit of the achievement of a normal life. Actually defining what "normal" is, is another question altogether! But let's assume you feel that therapy could help you overcome an issue you have, for example, too much anxiety, and try as you have you cannot find the answer! Well, this is where therapy can help, especially hypnotherapy. You see it is my belief that it is not the lack of answers that can cause a problem; sometimes it's the lack of "the question" that is the problem. When your mind is closed when your beliefs are too narrowly focused, you suffer from a phenomenon called confirmation bias. Basically, your brain and mind look for evidence to support your own narrow beliefs. Essentially you are looking for things to prove your assumptions and can and often do, totally ignore evidence that contradicts your theory or beliefs.

That's ridiculous I hear you say! Well at the level of consciousness I would totally agree with you, however, confirmation bias mostly works below the level of consciousness and it does that because it is linked to our survival needs. Not necessarily a matter of life or death but not too far from that in brain/mind terms. The brain/mind defence system doesn't really care much about the quality of your life, its concern is purely about the continuity of it. Consciousness, on the other hand, is consumed, for the most part, with the quality of your life and it is this dichotomy that therapy seeks to address by bringing clarity, balance and resolution to this internal strife.

Once life, as perceived from the inside, matches that which is experienced from the without, we are in a position of sublime congruence. Peace, balance and harmony can only exist in the absence of conflict and hypnotherapy will teach you to create this internal and external balance. True, it may not be easy but it is very possible and life becomes a joy when that happens!

To find out more about how Hypnotherapy can help you, why not call +65 9186 3575 today or book your Free Consultation here - NOW?

The Research: A personal bias can influence everything from the brands we buy to the way we treat other people, and in today's world, these pre-existing beliefs can lead to intense racial, political and religious conflicts.

What if there were a way to reduce this bias? Research from the College of Business at Virginia Tech University suggests that it's possible to activate a mindset that leads people to become open to questioning their assumptions. The study is available online in the Journal of Consumer Psychology. One of the reasons biases are so rampant is rooted in the human need for "cognitive consistency," which means processing information in a way that confirms preset beliefs, explains Ann-Sophie Chaxel, a professor at Virginia Tech and author of the study.

"Usually we think we are objective when we make decisions, but we are very subjective," Chaxel says. "People unconsciously distort information to confirm their pre-existing beliefs." Chaxel explored whether she could lead people to reconsider their own beliefs by disrupting the cognitive consistency thinking process. She started by asking one group of participants to write short essays explaining why they agreed or disagreed with three statements that most people would disagree with, such as "Learning about the past has no value for those of us living in the present." This activated what is called a "counter-arguing mindset," which can help to reduce bias. Participants in the control group wrote essays about neutral topics, such as "What is your idea of a perfect vacation."

The results showed people who had written about why they disagreed with statements were much less likely to be influenced by their preliminary preferences in the choice process. "By prompting people to disagree with three unrelated statements, they became much more sceptical about their early preference," Chaxel says.

In another experiment, people read product descriptions about new sports drinks that would be theoretically launched by Coke and Pepsi. This time, the descriptions were equally favourable, so participants selected a drink based on their pre-existing preference for one of the brands. As before, participants wrote essays explaining why they disagreed with three statements or about three neutral topics. Then they made their choice between two Coke and Pepsi products. Again, people who had written essays refuting statements were less likely to be influenced by their pre-existing preference for one brand.

These findings suggest that exposing ourselves to beliefs that are different from our own is one way to counteract the tendency to become biased. "We tend to prefer being around people who share our opinions, but disagreeing is very healthy," Chaxel says. "Sharing our beliefs with people who have opposing views is a natural way to create a counter-arguing mindset."

Materials provided by Society for Consumer Psychology. Note: Content may be edited for style and length.