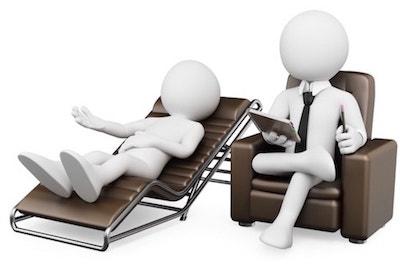 Are you by nature an anxious person, have you "always" been that way? These are often terms used by clients, to describe themselves. Fundamental truisms, held at the level identity; that, ultimately, become you . . .

In some sense, who we are is the collective position that takes shape and evolves out of our beliefs, values and morals. The degree to which your life mirrors and reflects that mental and emotional vision of self, is somewhat representative to the perception of how life feels. How good life feels, is the consequence of the chemical soup that pervades your brain and body but what makes or determines the ingredients of that neural chemistry? I say perception, rather than fact or reality simply because perception creates the reality and confirmation bias then finds the facts to support the perception of reality. The brain looks for what it wants and generally finds it by filtering out what it doesn't want!

So, this piece of research highlights a previously unknown involvement of the hippocampus. The amygdala and hypothalamus are well-known proponents of the stress response (fight or flight) and, I guess, these hippocampal anxiety cells are akin to scouts, i.e. they are always out there, looking for threats and danger. The hippocampus has direct links to these two protagonists, as well as the thalamus (our sensory relay station), so it is 24/7 early warning system, with a mandate to keep you safe; always!

However, when it comes to anxiety issues, the system can malfunction, it can overreact, it can see danger where there is none and turn what should be a good life, into a living hell. While scientists are working hard to develop ever smarter medications, which could take years and cost $millions, ordinary people need to find a way to make life more pleasant; now! Fortunately, they are in luck because hypnosis can help you discover the way, the way to a lasting peace and resplendent calmness that can be felt throughout every cell within your body.

How does it do this? By creating and developing the use of positive imagination! Anxiety, if you ever needed proof, is a classic example of what happens when you are overwhelmed by negative imagination. Anxiety isn't about the presence of real danger (that's fear), it's about the anticipation of it. As described below, in that journey down that poorly lit street, those anxiety cells begin to fire in the presence of the stimulus. The stimulus is the dimly lit street but the anxiety/fear is a consequence of your beliefs and knowledge of what has, could or will happen there. The emotional memories, held in the amygdala, then begin to set you up for the stress response (HPA Axis) and in what way that unfolds; will you fight; will you run? Hypnotherapy helps you rewrite the script. In a sense, it is like an emotional filter that sits neatly between these emotional systems. In reality, it represents the outcome of better mind management. Either you develop the ability to use your mind, thru hypnosis, or your mind will use you; it's your mind; your choice!

My aim here, is to highlight the way hypnosis can help many people, whose condition is not responding to other medical interventions. Hypnotherapy,, essentially helping ordinary people; live a more ordinary life! To find out more, why not make an appointment for a Free Consultation - here

Do your palms sweat when you walk down a poorly lit street at night? That feeling may be traced to the firing of newly identified "anxiety" cells deep inside your brain, according to new research from neuroscientists at Columbia University Irving Medical Center (CUIMC) and the University of California, San Francisco (UCSF).

The researchers found the cells in the brains of mice, inside a structure called the hippocampus. But the cells probably also exist in humans, says Rene Hen, PhD, a professor of psychiatry at CUIMC and one of the study's senior investigators.

"We call these anxiety cells because they only fire when the animals are in places that are innately frightening to them," Hen says. "For a mouse, that's an open area where they're more exposed to predators, or an elevated platform." The firing of the anxiety cells sends messages to other parts of the brain that turn on anxious behaviours -- in mice, those include avoiding the dangerous area or fleeing to a safe zone.

Though many other cells in the brain have been identified as playing a role in anxiety, the cells found in this study are the first known to represent the state of anxiety, regardless of the type of environment that provokes the emotion. "This is exciting because it represents a direct, rapid pathway in the brain that lets animals respond to anxiety-provoking places without needing to go through higher-order brain regions," said Mazen Kheirbek, PhD, an assistant professor of psychiatry at UCSF and study's other senior investigator.

"Now that we've found these cells in the hippocampus, it opens up new areas for exploring treatment ideas that we didn't know existed before," says the study's lead author Jessica Jimenez, PhD, an MD/PhD student at Columbia University's Vagelos College of Physicians & Surgeons.

Anxiety is healthy. To a degree:  Anxiety is normal and critical to an animal's safety. Anxiety is an emotional response to a distant threat -- being in an environment that exposes an animal to predators, for example. The safe bet is to sidestep those environments, so anxiety kicks in avoidance behaviours. When people overestimate threats -- when talking to a crowd invokes the same response as potentially running into a snake -- anxiety becomes a problem. To understand how things go awry in anxiety disorders, researchers in the Hen lab have been looking at mice to decipher how the brain processes healthy anxiety. "We wanted to understand where the emotional information that goes into the feeling of anxiety is encoded within the brain," said Mazen Kheirbek, PhD, who was an assistant professor at CUIMC before moving to UCSF.

The hippocampus plays a well-known role in the brain's ability to form new memories and to help animals -- from mice to humans -- navigate through complex environments. But recent research has also implicated the hippocampus in regulating mood, and studies have shown altering brain activity in the ventral part of the hippocampus can reduce anxiety. It's also known that the hippocampus sends signals to other areas of the brain -- the amygdala and the hypothalamus -- that have also been shown to control anxiety-related behaviour.

Anxiety cells identified with miniature microscope:  Using a miniature microscope inserted into the brains of the mice, Hen's team recorded the activity of hundreds of cells in the hippocampus as the mice freely moved around their surroundings. Whenever the animals were in exposed, anxiety-provoking environments, the researchers noticed that specific cells in the ventral part of the hippocampus were active. And the more anxious the mice seemed, the greater the activity in the cells.

The researchers traced the output of those cells to the hypothalamus, which is known to control behaviours associated with anxiety (in people, those include increased heart rate, avoidance, and secretion of stress hormones).

Therapeutic directions:  The discovery of the anxiety cells raises the possibility of finding treatments that target them and reduce anxiety. "We're looking to see if these cells are different molecularly from other neurons," Hen says. "If there's a specific receptor on the cells that distinguishes them from their neighbours, it may be possible to produce a new drug to reduce anxiety."