Did you ever wonder why it may be hard for you to quit smoking? 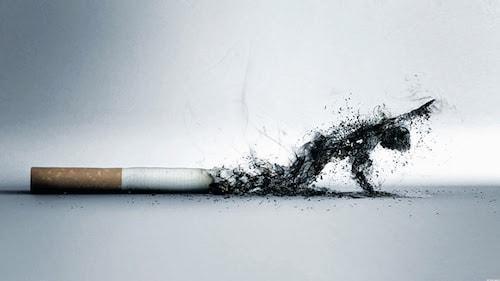 If you are a smoker, then I'm sure that quitting has passed through your mind on many occasions but, here you are still smoking! So, the next time you want to quit, this one is just for you because the idea that stopping smoking is hard to do is one of the greatest myths of all time and here's why . . .

Once you climb the mental hill, it's downhill all the way to the beach!

However, I want to preface this blog by saying, that I am not suggesting that just because you may have tried and failed that there is anything wrong with you. For example, the idea that you are weak-willed or lack determination etc, but it is possible that you could have been duped into thinking that about yourself? The most compelling reason behind what I say is that we (because I used to smoke) have been fed some pretty fanciful information about why it is hard to stop smoking. For example, scientists say that it is as addictive as heroin, cocaine and amphetamines! But I believe there is a more psychological component to the addiction than a physiological one. For example, smoking constricts arteries, stresses your heart, increases your likelihood of a heart attack and, obviously, raises blood pressure, yet, despite this, smokers say, it helps them relax?  Even worse than that, (can it get any worse than that?), it causes oxidative stress and, among other things, affects melatonin levels, which help to protect your respiratory system from the harmful effects of nicotine and thus increases free radicals, it also affects your brain and almost all of your body! When one considers the cost to your health and life of having too many FREE radicals, calling them free is somewhat paradoxical!

The reasons behind many a failure, for the want of a better word, is not one of deceit or a general untruth; e.g. when daddy said he was going to quit, for me, he really meant it! The reason is to do with the psychological drivers that made him start in the first place. In its simplest form, smoking is a survival strategy. That's right, while all the medical and personal knowledge is telling you the exact opposite, deep down your subconscious links smoking to survival! But there are many ways to look at this as a survival strategy. One could be a trauma-based response. I recall watching one of the WWII Band of Brothers Episodes, Carwood Lipton and George Luz just escaped death when a Nazi shell landed outside their foxhole but didn't explode! George, with great relief, lit up a cigarette and Lipton took it from him. George said, "I didn't know you smoked," Lipton said, "I don't"! That was a really powerful example of a trauma-based smoking link of survival; albeit subconsciously created. Lipton later died around 2002 with a lung-related disorder. Another example, a lonely and shy young man, reaching smoking age, who gives cigarettes out at a social gathering and through that interaction creates feelings of connection, love, value and very long lasting friendships. A possible subconscious link is, that without smoking he'd have no friends. Another example is someone who you admire or love, e.g. your father/mother, an Auntie/uncle or close friend etc. you see this person is liked by lots of people, the centre of attraction, the life and soul of the party etc. The psychological connection is obvious; they're like that because they smoke! Illogical, yes indeed; but that is the nature of how the subconscious brain works. It is also the main reason why Daddy won't quit; no matter how many likes his little angel may get on her fb page!

Now I'm not saying smokers, who try will power, gum, patches etc, won't quit at all, for sure some will and it may last but most either won't quit at all or it just won't last. The most empowering way to quit smoking forever is to have a really strong personal reason. Like the guy who has a heart attack and the Dr. says, "you were lucky; this time". He will almost definitely quit and for good. The reason being, that his mind just got the wake-up call it needed to the real danger of smoking. Another empowering reason to quit is pregnancy, most pregnant mothers quit smoking and often drinking too, the reasons are somewhat obvious, I hope? In a certain way, the subconscious is very selfish and it will act more conscientiously towards self-survival that it will daughter pressure. The need for survival after a heart attack is obvious and the need to protect one's progeny goes back to primordial times. However, what are the options for those who are lucky enough to have not had a heart attack and those who are not or cannot get pregnant? The answer is hypnotherapy! Hypnotherapy can help you to change the memories that link smoking to survival. It helps you reconsolidate the illogical logic of the memories that allows you to deny the reality of smokings harmful effects and update the conscious knowledge with the non-conscious false reality.

Hypnosis is a proven and effective way to achieve your stop smoking goals. Hypnotherapy can effectively rewrite the neural code that creates the desire, nay the need, to smoke! Once these memories have been rewritten, the new neural code becomes permanent and most often without any withdrawal or urge to smoke again.

For another psychological perspective on smoking cessation, here is an interesting article by the British Psychological Society